0 Kommentare March 3, 2018by Thorben
Hey, guys! Just a heads up: The linked offer is already a bit older and the price of the gadget might have changed or it might not be available anymore.

Xiaomi, the Chinese manufacturer that basically produces everything there is and everything you could think of, is at it once again. This time they have developed a smart soy milk maker – because you should treat yourself – right!? 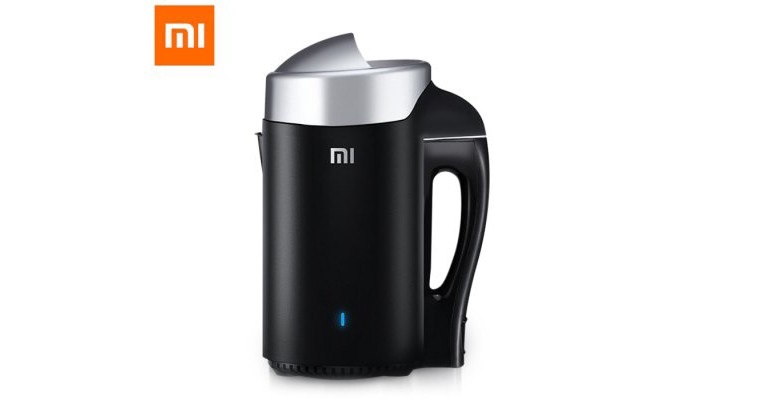 The soy milk machine from Xiaomi kind of looks like an ordinary electric kettle you can find in almost every household. But instead of being ordinary and having a simple on/off button, the kettle is integrated into the manufacturers Smart Home program. So now, you can not only rely on, let’s say, the Xiaomi WiFi Repeater or smart light with the Xiaomi LED ceiling light. You are now able to make your own, fresh soy milk at any given time, as well – from your smartphone. Everything else would be too easy, wouldn’t it?

Frankly, I am a bit disappointed that they are only using Bluetooth 4.0 and not the latest – and better – Bluetooth 5.0 technology. But then again, there is WiFi support and a built in 1.7 GHz Quadcore processor, plus 8 GB of memory and 2 GB of internal memory – so the soy milk should certainly taste a lot better than without the fancy milk maker..

It’s a pity that there’s no touch screen since I just really love playing a few games or watching Youtube videos while preparing my delicious, home made soy milk – and judging by the technical data, it shouldn’t even have been a problem. And while the kettle can at least be controlled by an app, the required ingredients must still be put in by none other than a human being such as yourself. Apparently, they did not think this completely through – where’s my Bluetooth household robot when I need one??