1 Kommentare June 12, 2018by Thorben
Hey, guys! Just a heads up: The linked offer is already a bit older and the price of the gadget might have changed or it might not be available anymore.

This screwdriver set, which belongs to Xiaomi’s Mi Home series, appeared in the shops a while ago. In addition to comparable sets from China, the price seems pretty high, but Xiaomi again relies on design and (German) quality. But is that enough to justify the price for the Xiaomi Wiha screwdriver set? 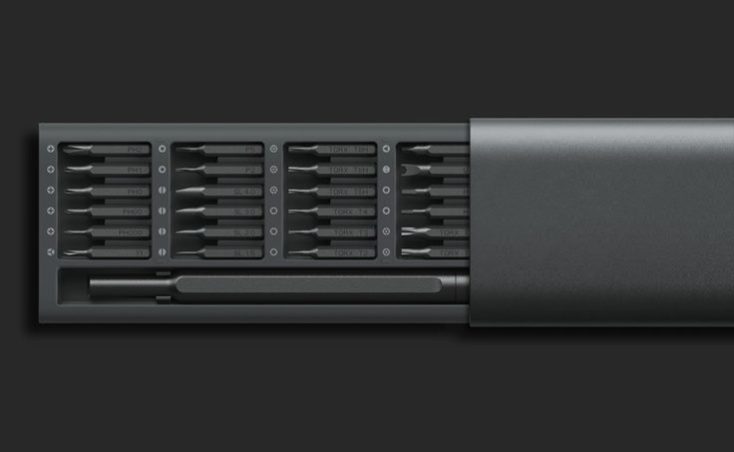 As you would expect from Xiaomi, the manufacturer dispenses with its characteristic white packaging even with a precision screwdriver set. The set itself is shown on it. The back provides information about the nine different types of bits located inside. On the front you will find a note that this product was awarded the reddot Award 2017.

In a second, in my opinion unnecessary, white packaging you will find the 24-piece set, which gives you a direct high-quality impression. The metal case is still decorated by a kind of envelope, which indicates the click mechanism for opening the box. Box and handle are made of aluminium, the bits of steel. The actual storage box is unfortunately only made of plastic, which should not be a negative aspect because of the good workmanship, one should mention it nevertheless. 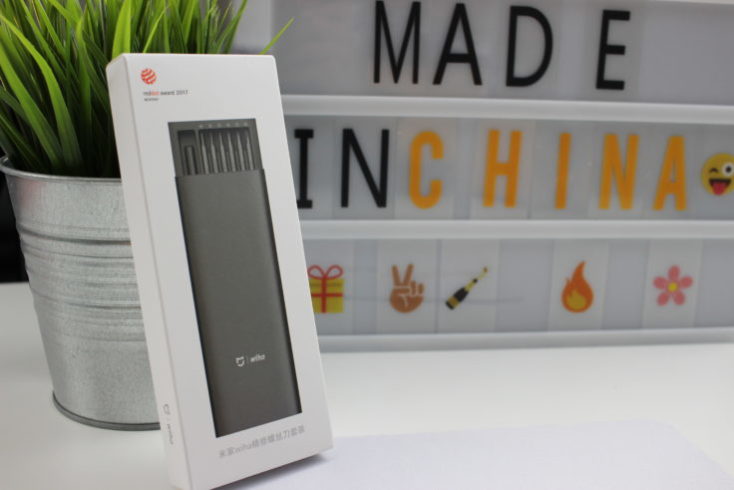 Typical for Xiaomi is the very appealing and detailed product design. At first glance, the box looks like one of Xiaomi’s Powerbanks; the grey outer shell is made of brushed aluminium and shows the Mijia and Wiha logos in white. Inside each bit is marked individually, which makes the whole thing nice and clear. The box measures a total of 168 x 67 x 17 mm, making it quite comfortable to store and transport.

The tools are produced in cooperation with the German tool manufacturer Wiha, which is also extensively referred to in the advertising graphics. This may be particularly beneficial for sales in China (“German quality”), but if the tools are good, who says we can’t order them from Germany ourselves?

Precision mechanic sets like this are used, as the name suggests, for smaller screwdriving jobs, such as smartphones and laptops. Don’t even think about using it to build up your living room cupboard.

The Xiaomi Wiha screwdriver set contains 24 individual steel bits next to the actual screwdriver/handle. These are different models, namely:

Let’s start with the handle, which is the actual screwdriver. This is 12.6 cm long and offers a pretty good grip due to its structure. An additional, rubberized surface would, however, offer even more grip for my senses. The turner is attached to the storage box with a click. Especially practical is the end of the handle, which is not completely attached to the rest. This allows you to hold the handle there and turn the screwdriver independently – very practical. So you don’t have to use the whole screwdriver, which makes you a bit more flexible.

The 24 bits are magnetically fixed in the box. This makes removing and inserting the bits really easy. Small symbols above each bit indicate the bit type. Such a bit is then also magnetically attached in the handle and sits firmly there, but can still be removed relatively easily. By the way, the handle does not fit into its holder including the bit, so you have to remove it first. 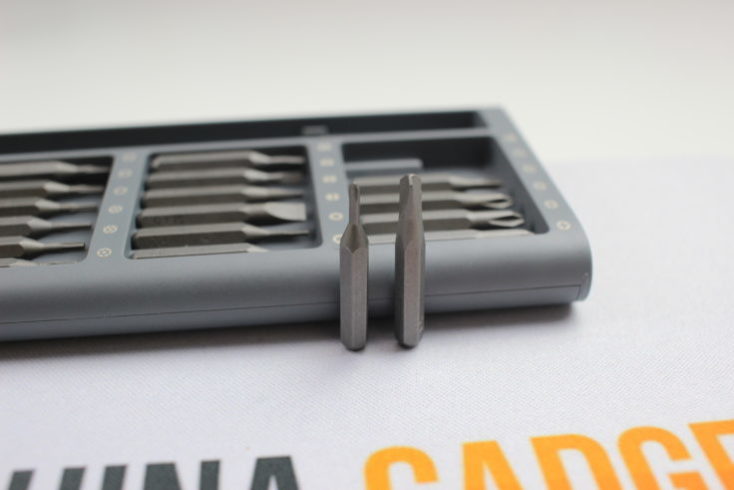 Only the question of price remains: Is the Xiaomi Wiha screwdriver set worth the money? Similar sets are also available for less money, although the quality there is often rather poor. A look at Amazon shows some sets for less money, where you usually find single screwdrivers (and no bits). With the Xiaomi set, everything is more space-saving and the comfort of holding the handle also plays a role.

The 24-piece precision screwdriver set, which is the result of a collaboration between Xiaomi and Wiha, makes a really good impression overall. The workmanship is right and the magnets used make it practical in use. The selection of the bits is relatively large and it was thought of in the right places. The disadvantage here is that the fields of application are rather limited and the set therefore probably makes the most sense for a hobbyist. If you buy the set on offer, you don’t do much wrong in our eyes and we think that it is also suitable as a gift for daddies or grandfathers workshop.