0 Kommentare June 12, 2020by Timm
Hey, guys! Just a heads up: The linked offer is already a bit older and the price of the gadget might have changed or it might not be available anymore.

In addition to the Xiaomi Mi 10 and Xiaomi Mi 10 Pro, other new Xiaomi products were also introduced. These include the Xiaomi Wireless Charging Bluetooth Speaker, which can also charge mobile phones at 30 watts. The concept isn’t new, though; we already had a very similar model with the Anker Soundcore Wakey speaker. Who has the lead here? 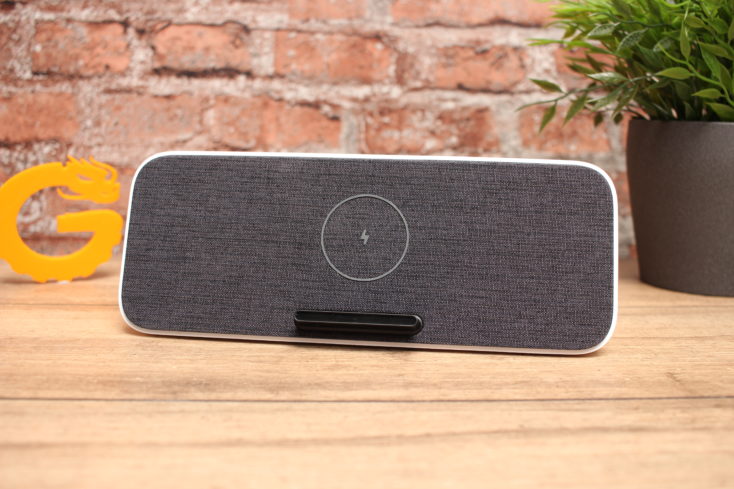 We received the packaging somewhat damaged, but the speaker was not damaged. Unfortunately, you know as much as before after opening the package, as everything is described in Chinese except for the Bluetooth symbol. Therefore, the European CE marking is not printed on the package, but only the Chinese CCC symbol.

The accessories will hardly impress anybody, so all you get besides the speaker is a manual and a charging cable. The manual is included (surprise!) in chinese. The charger cable is no exception and so you should have a suitable adapter at hand so that you can use the speaker. Nobody will jump in the air with this package, but the function is more important.

The loudspeaker looks quite noble, I don’t want to deny that at this point. Unfortunately, on closer inspection, the impression of holding a large piece of plastic in one’s hand becomes apparent. I don’t notice any fingerprints and if the speaker is placed at a distance, e.g. on a coffee table, it can look quite nice.

On the back, the charging port is hidden below and the Mi logo is discreetly hidden above. With a good 500 grams, the speaker isn’t unpleasantly heavy either and can be operated with the controls on the top. At the front there is a small black holder, which becomes important if you want to use the speaker for wireless charging from your smartphone. A small green LED indicates when a device is charging.

The Xiaomi model measures 23.4 x 8.65 x 7.39 cm and although the box is mostly plastic, there are no manufacturing flaws. We’re used to that from Xiaomi and the front bracket is also very positive, as it’s rubberized and very stable. So you don’t have to worry about whether the cradle will even hold your Smartphone with its cover.

In comparison to the Anker Soundcore Wakey, the speaker looks much more handy and simple. The Anker Box comes across as quite a block, which is probably due to the positioning of the Qi charging station. While this is mounted on the upper side in Anker, it is elegantly integrated on the front side in Xiaomi. Whether you have to take sound deductions for it, more about that in a moment.

First and foremost, the Xiaomi model remains a loudspeaker. If the sound is no good, even the best integrated Qi charging station is useless. The sound is driven by 2 x 5 watt drivers and a bass amplifier, which is supposed to convince when listening to music. This makes it very similar to the Earfun Go and the mentioned Anker Soundcore Wakey.

In a direct comparison, one notices some differences to the competing products. Let’s start with the comparison to the Anker Soundcore Wakey and so much in advance: the difference in size is definitely noticeable here. Xiaomi offers significantly less bass and treble at normal volume, but the Anker model has a richer sound. However, as soon as the volume goes up, the Anker box overdrives again, while Xiaomi keeps the sound clean. So if you want to listen to music at normal volume, the Anker Soundcore Wakey is the better overall package, and if you want to party, the Xiaomi Box will make you happier.

The comparison to the normal Bluetooth speakers is also interesting, and here, for example, the Earfun Go speaker is at the top of its price range. Unfortunately, the Xiaomi speaker also has to admit defeat to this; overall, the competition from Earfun simply sounds more balanced. The Xiaomi speaker isn’t bad at all, but in comparison it simply doesn’t sound as spacious and rather muffled, so it can’t convince us 100%.

The Xiaomi speaker is equipped with Bluetooth 5.0 and also NFC. On the other hand, the Xiaomi does not have any AUX or USB connections, in keeping with the motto “If wireless, then wireless is done right”. A range of at least 10 meters is promised here, whereby we can confirm these values in our test.The coupling via NFC was also quick and easy with various smartphones.

A microphone is integrated on the upper side next to the NFC field. In our practical test this worked, but it doesn’t really offer an improvement to the smartphone microphone. Xiaomi’s praised echo suppression, which is supposed to filter out the sound of the voice as clearly as possible for the conversation partner, works quite well, so the sound can be clearly understood by the other person. For me, the hands-free function isn’t perfectly suitable, since the wired box makes it almost impossible to move around the room and the micro quality quickly deteriorates.

It’s not so easy to find out how to use the buttons when the complete instructions are in Chinese. But since there are only three buttons, it’s hard to go wrong here. Beside the on/off switch, only the volume up and down buttons are enabled for operation. Bluetooth is automatically activated when the box is turned on and in the test the connection worked quickly and without problems.

Unfortunately, the concept is probably intended primarily for watching movies. Of course, it’s very practical to have the display directly in front of the box and thus get a good sound with the picture. Unfortunately the box is only connected with a (relatively short) cable, so you can’t even watch a movie on the bed.

While playing music you will notice the “missing” buttons, so you can only skip and stop songs on your mobile phone. But if the smartphone lies (horizontally) on the cradle this is neither intuitive nor practical. I find Anker’s solution a bit more comfortable, if the mobile phone is on the top you can use it a bit easier.

Why not? The Qi charging station with 30 Watt

The highlight of the Bluetooth Box is supposed to be the Qi charging station with 30 Watt. Currently, only the Xiaomi Mi 10 (Pro) and the OnePlus 8 Pro 30W support wireless charging, whereby the latter is only compatible with the OnePlus charger. The speaker here is therefore especially designed for the Mi 10, but should also charge other Qi-capable smartphones wirelessly. We tried this with the Mi Mix 3 and an iPhone 11, but unfortunately we didn’t have the Mi 10 at the time of testing.

To be honest, the result is quite sobering. The Mi Mix 3 gained only 3% battery in a total of 30 minutes of testing, while the Anker Soundcore Wakey speaker charged a respectable 16%. Either our Mi Mix 3 has problems with Qi charging or Xiaomi has actually only optimized the speaker for more powerful models like the Mi 10. But since only a small percentage of users have this modern 30 watt standard, Xiaomi unfortunately limits the target group to a very small number. An iPhone 11 has charged the Qi charging station normally.

Conclusion: useful gadget – or would you rather buy it separately?

Unfortunately, I can only give a very limited recommendation to buy. The Xiaomi Bluetooth Speaker with Qi Charging Cradle is neither completely convincing in terms of sound nor can the charging cradle charge quickly on “normal” smartphones. Only with flagships (for example the Xiaomi Mi 10) is the box really fun, watching movies, having good sound and charging the phone at the same time, I imagine it’s very practical.

If you don’t own a Mi 10 (or the Mi 9, which supports at least 20 watts of wireless charging), you should not use this speaker. For the same course I would rather recommend the Anker Soundcore Wakey, not only the sound is better, but also the alarm function on board. Actually, I still think the idea is really good and I’m curious to see what other products Xiaomi will bring to the market. Are you happy about such innovations and hope for more, or do you say Xiaomi should concentrate on the essentials?