1 Kommentare July 12, 2019 by Maike
Hey, guys! Just a heads up: The linked offer is already a bit older and the price of the gadget might have changed or it might not be available anymore. 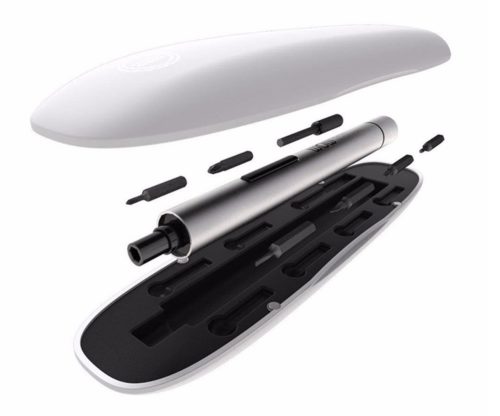 The wowstick comes in a white storage tray, which is closed by magnets. If you take off the lid, you can already see the wowstick with its 18 bits. As with most Xiaomi products, the screwdriver is wrapped in silver aluminium.

As already mentioned, the Wowstick has 18 bits. That’s five less than the Xiaomi Wiha screwdriver set, but you have to screw there yourself. The fixing of the bits is relatively simple via magnetism. All you have to do is put them in and you’re ready to go.

In order for the screwdriver to move, the black button on the stick must be pressed. The direction of rotation changes depending on which side of the button you press. The speed is fixed at 100 rotations per minute and cannot be changed. Another useful feature is the built-in LED, which gives you a little light when screwing. This is especially useful if you have a poorly lit spot and do not want to hold a flashlight at the same time.

The wowstick must also be powered from somewhere. This is ensured by two normal AAA batteries with which the stick can be operated for 8 hours at a time. Alternatively, there is also a version that contains a battery that is charged via micro-USB.

Of course, the wowstick is not as strong as a conventional cordless screwdriver. But this is also to be expected with the small size. Nevertheless, it is certainly a very suitable tool for smaller screws. So if you often disassemble or screw things together, the wowstick will help you. What do you think of the Xiaomi electric screwdriver?