1 Kommentare November 4, 2018 by Maike
Hey, guys! Just a heads up: The linked offer is already a bit older and the price of the gadget might have changed or it might not be available anymore.

The Yeelight series has become a household name. Here is another member of the series: the Yeelight Candela, the smart candlelight or gas lamp light. With its warm and cosy colour temperature of 1800K it is exactly the right Smarthome Gadget for the coming cold days. 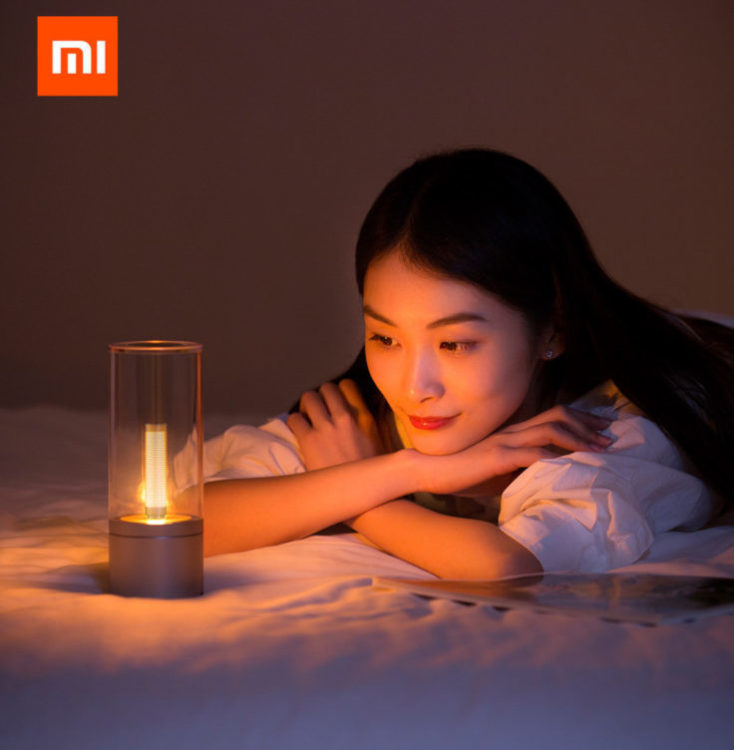 Basically, the Xiaomi Yeelight Candela is a simple electronic gas lamp light. At least that’s how it seems. But in fact this lamp has nothing to do with the cheap flickering electronic candlesticks, which are used more and more.

Compared to many other China gadgets, our version of the Yeelight Candela seems to be designed for the global market. All labels and instructions on the packaging are written in English. 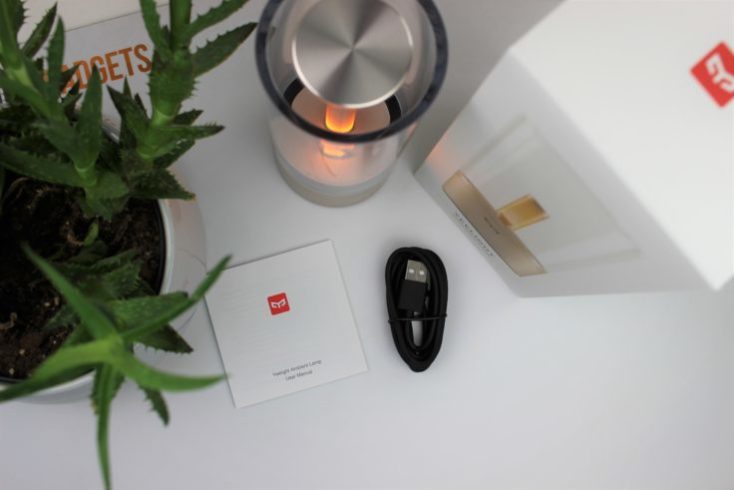 The box itself contains, next to the lamp itself, only a Micro-USB charging cable and a manual in English. Although the Yeelight Candela is equipped with a CE mark, a corresponding charging adapter is not included.

As usual with other Yeelight products, the Candela is flawlessly finished, there are no material or manufacturing defects. – very good! With a height of 19.5 cm and a diameter of only 7.2 cm, the lamp is slightly smaller and much narrower than the Yeelight bedside lamp, which we have already tested. 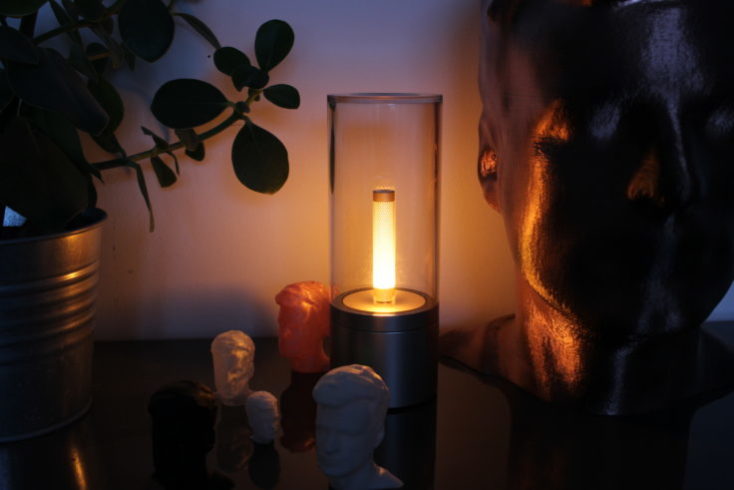 The base of the lamp is about 5 cm high and covered with metal in a subtle golden tone. Accordingly, the transparent acrylic dome is 14.5cm high. Unfortunately it can’t be opened, a change of the built-in LED lamp is apparently not planned. 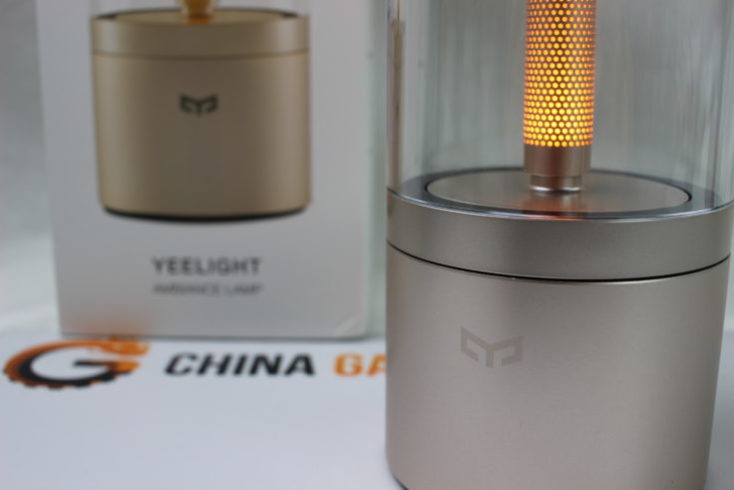 All in all, the design of the 7 cm high “light stick” with its metal grid optic is reminiscent of a gas lamp as you might know it from camping. In my opinion, the warm light imitates the glow of the rod very authentically. Otherwise, however, the Yeelight Candela makes a good impression on me, at least in terms of workmanship and design there is nothing to complain about.

Let there be light – the Yeelight Candela in the test

The Yeelight Candela can be controlled by simply turning the dome. If you turn it clockwise, the lamp switches on at the darkest brightness. If you turn it further, the candela becomes brighter and brighter until the maximum brightness of 10 lumens is reached. By turning it counterclockwise, however, the smart lamp becomes darker again. 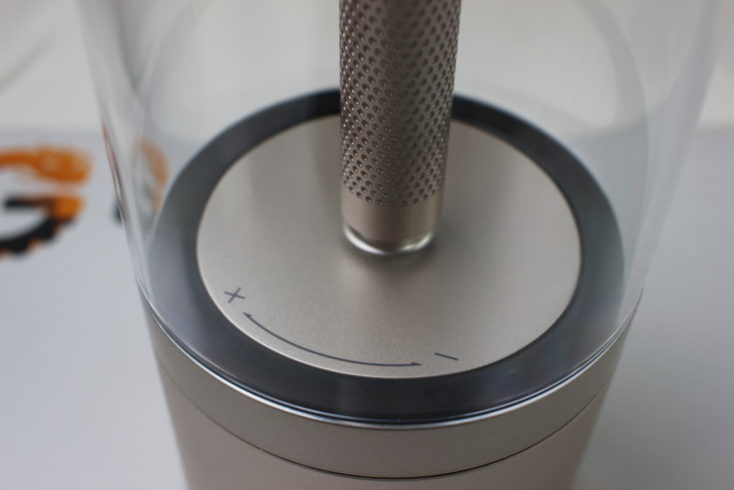 If you first turn the dome clockwise and then a little counterclockwise, the “candle mode” is activated. In this mode the LED light flickers, similar to a real candle would do. The light has a color temperature of 1800 Kelvin, which I like well in the test of the Yeelight Candela.

Especially in dark rooms it emits a warm and, in my opinion, pleasant light that invites you to crawl on the couch especially in autumn and winter. If you are too lazy to operate the lamp by turning it, you can also do so using the Yeelight app.

Connection via Bluetooth and Yeelight App

The Yeelight app, which we already know from other Smarthome gadgets like the Yeelight bedside lamp, the Yeelight bulb or the Yeelight LED strip, is available for Android and iOS. On the underside of the candela is an on/off switch that also turns on the Bluetooth mode. 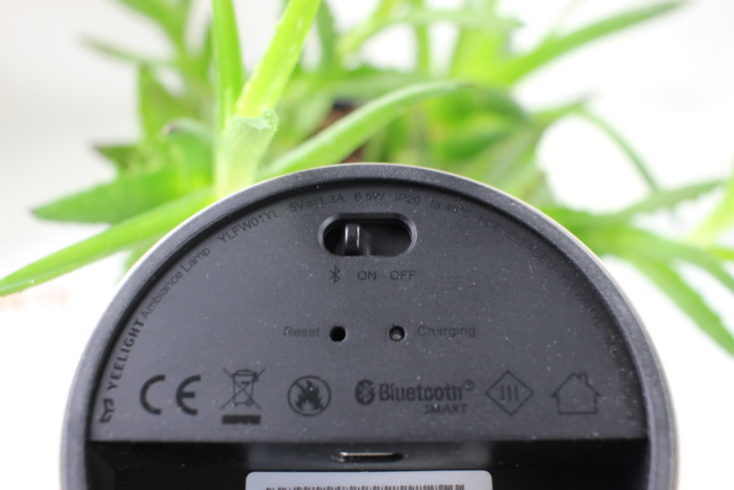 If the lamp is successfully connected to the smartphone, various modes can be selected via app. However, these only differ in the brightness of the lamp. In night mode, for example, the brightness is reduced to 10%, in dinner mode it is 100% brightness. 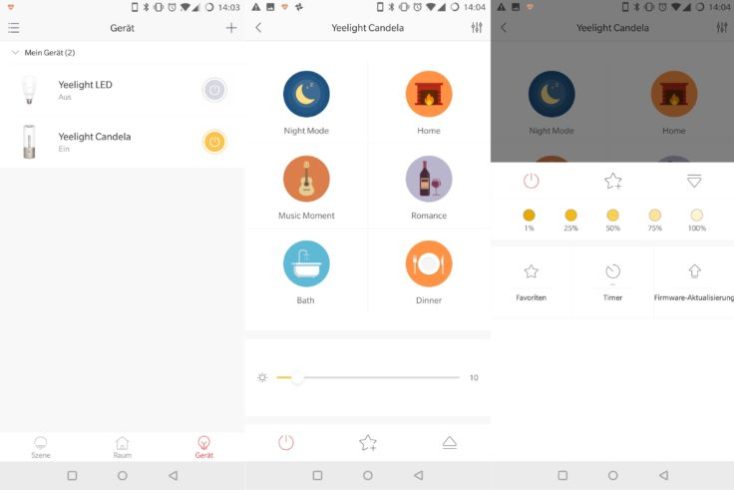 With the slider on the middle screenshot, the brightness is adjusted individually and can be saved as a favorite under the star symbol. In addition, a timer function is implemented with which the lamp can be switched off according to plan. Unfortunately, the Yeelight Candela is not equipped with a WiFi module, so it cannot be integrated into your domestic Smarthome.

The Yeelight Candela is equipped with a 2100 mAh battery. This battery lasted about six hours in the test, at full brightness in Bluetooth mode. With lower brightness, the battery life of the lamp is correspondingly longer. But most of the energy is saved by deactivating Bluetooth. Thus, the Yeelight Candela achieves a battery life of approximately eight hours in the test. With a medium brightness, even a runtime of approximately 12 hours is feasible.

The recharging process took about three hours in the test. A red LED indicator on the bottom indicates that the battery is charging and goes out when charging is complete.

Apart from the price, I like the Yeelight Candela pretty much. The LED lamp in gas lamp optics shines in a pleasantly warm light and is thanks to app control and some smart functions a fancy alternative to ordinary smart LED lamps.

It’s not as romantic as a real candle, but in my opinion it comes closest to it. Unfortunately, the Yeelight Candela is not equipped with a WiFi module and cannot be integrated into the home Smarthome network – a pity. But maybe a second version of the cosy lamp will come soon, like the Yeelight bedside lamp.