0 Kommentare September 20, 2019by Thorben
Hey, guys! Just a heads up: The linked offer is already a bit older and the price of the gadget might have changed or it might not be available anymore.

If you are interested in a smart home, but want to invest rather little money at the beginning, you can hardly get past Yeelight. The manufacturer makes it his business to produce smart lighting at low cost but with good quality. One of the cheapest options is the Yeelight Smart LED light bulb, which we have already tested. Now Yeelight is launching a new edition, which comes with small optimizations. 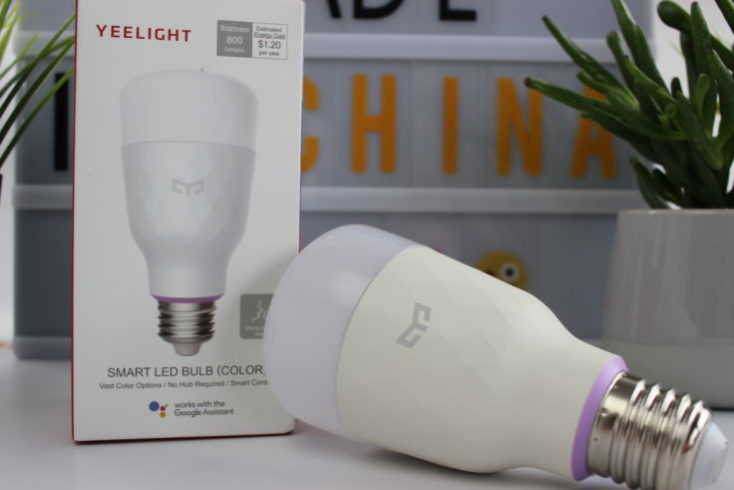 As you would expect from an electric light bulb, the scope of delivery is not very large. The packaging is red and white, on the front you can see a picture of the Yeelight bulb. The technical parameters on the back can be deciphered due to the international units, but the descriptions are in Chinese. Strangely enough, the explanations on the left and right side of the package are in English and therefore easy to understand. 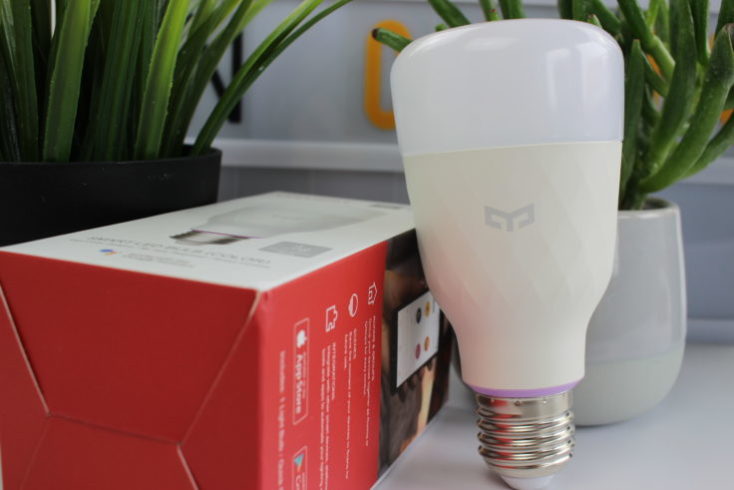 Inside we find the well packed Yeelight Smart Bulb and a manual in Chinese and English! In comparison to their predecessors, they have learned a lot.

The new Yeelight Smart LED light bulb looks very similar to the previous generation at least in silhouette. Yeelight does not work with the “classic” form of a light bulb. The base, optionally E26 or E27, is followed by a white part, which makes up the majority of the entire bulb. Unlike its predecessor, however, it is now white and not in grey-silver aluminium. This is followed by the actual lamp part, which is probably not made of glass, but plastic. With dimensions of 6.5 x 13 cm, it is slightly larger than the older version. The weight has also increased significantly with 195 g, the first bulb still weighed 145 g.

Before we start with installation and home use, a few facts. The output of the Yeelight YLDPO6YL is 800 lumen, 200 lumen higher than the previous model. The colour temperature scale ranges between 1700 Kelvin (warm white) and 6500 K (cool white). The LED bulb has an output of 10 W at 220V -240V 0.05A. The service life is stated as 25,000 hours. Besides the light source, a little more technology is integrated. The Yeelight is not equipped with Bluetooth, but with a WLAN module. This is the WiFi 802.11 b/g/n 2.4 GHz standard. 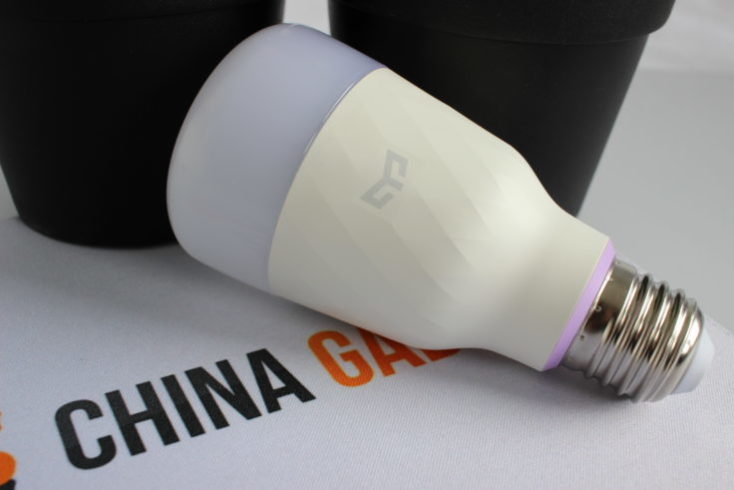 Thanks to the English user manual, installation is also somewhat easier than with the predecessor. At the beginning you have to screw the bulb with E27 connection into the suitable socket, so that it is supplied with power. Then it is recommended to reset the Yeelight bulb. This works by turning them on and off five times, leaving them on and off for 2 seconds at a time. Then the bulb glows brightly coloured for a short time and then white. Then it can be connected to the Yeelight App.

As an Android user you must be at least on Android 4.4, users of an iPhone or iPad should have at least iOS 8.0 installed. We tested both operating systems and both worked without problems.

In the app you should select as Sever Mainland China and you can select the bulb (LED lamp color 2) under Devices. You probably already know the following procedure. Select the WLAN network to which the lamp is to be connected and then select the WLAN of the lamp to integrate the lamp into the network. This worked wonderfully and within about 5 minutes the lamp was ready to start.

For this you should use a conventional “lamp”, with a somewhat older dimmer switch the Yeelight did not work!

The difference between a standard light bulb and a smart light bulb is the much larger range of functions. The integrated WLAN module allows you to connect the Yeelight Smart LED light bulb (2018) to your smartphone. We can do this with the Yeelight app, which we are already familiar with.

Once this hurdle has been overcome, the app offers various functionalities. The remote control via the app would be very simple, so that the lamps can also be switched on and off while on the move. Of course, the operation can also be adjusted in time. For example, you can have the clocks switched on every evening at 20:00. A timer function is also integrated. So if you want to fall asleep with light light, you can simply set the timer to a maximum of 60 minutes.

You can choose from a total of 16 million colours, which range in colour spectrum from 1700 K to 6500 K. It is also possible to create different “scenes”, i.e. presets that are adapted to your individual needs. 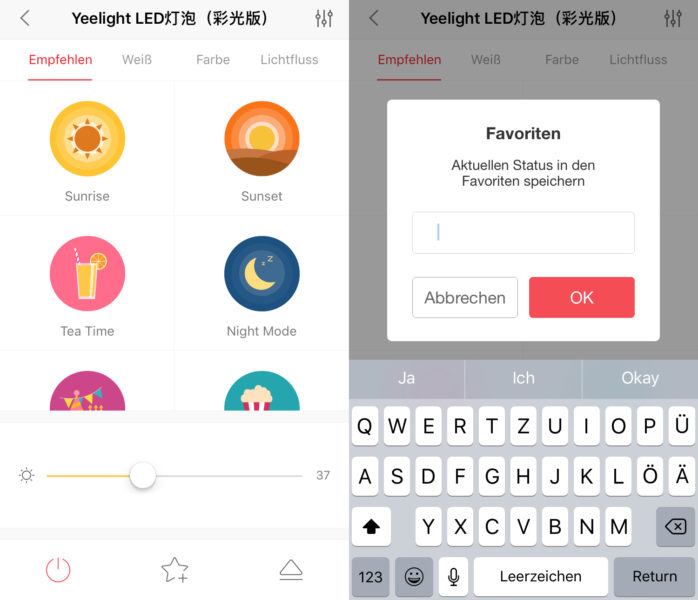 The preset scenes, from which one can freely choose, are also practical. If none of them really agree with you or you want to add one, you can do that as a favourite. Once you have the settings you want, just save them as favorites and name them (see above). There is also the music mode again, but unfortunately it does not work with us.

Operation via the app is intuitive and you will find your way around very quickly. The lamp takes a good second to execute the commands, which in my opinion is completely within the bounds.

To be honest, this year’s Yeelight Smart LED light bulb does not bring much new. With 800 lumen it is a little brighter than the previous generation. The design has also changed slightly. The biggest change is probably that it should be more energy-saving. Already with the Yeelight bedside lamp, the manufacturer has made only minor changes. “Never change a winning team” you could say. If you already own the first generation, I don’t think an upgrade is worth it. But I’m getting started with this generation and I’m really very satisfied, because the installation is very easy and the range of functions meets all my expectations!