0 Kommentare March 31, 2019 by Maike
Hey, guys! Just a heads up: The linked offer is already a bit older and the price of the gadget might have changed or it might not be available anymore.

Part 2 of the Yeelight series deals with the Xiaomi Yeelight Smart LED light bulb. As already mentioned, Xiaomi continues to work on the complete coverage of the home with its own products. In the field of smart light sources we now introduce the Smart LED bulb next to the Smart LED strip. These can now also be controlled via Amazon Alexa / Google Assistant. 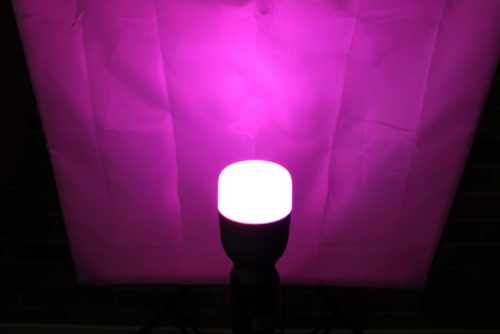 Scope of delivery & processing of the Smart LED bulb

The Yeelight Smart LED light bulb comes in a small, commercially available box for light bulbs and contains only a small instruction manual in addition to the bulb. This one is written in Chinese again. But with a simple light bulb, what can you do wrong with the installation? The light bulb itself is made of light aluminium and is quite heavy in the hand. All in all, it makes a qualitative and high-grade impression.

The bulb is connected simply by screwing it into a suitable E27 socket. However, it seems that you can do something wrong during installation, because despite several attempts, the Yeelight app (which has already been installed for the Smart LED band) does not recognize the light bulb after the connection to the Wifi has not worked. Fortunately, the app gives help to restart the bulb. On my own I wouldn’t have guessed that you have to switch the bulb on and off five times. But behold, the bulb starts to glow in different colors and is recognized by the app again. After successful connection with the Wifi nothing more stands in the way of the various setting options.

Functions via the app (RGB version)

Since the functions are also running via the Yeelight app, they are almost exactly the same as with the Smart LED band: Power, Hue, White, Flow and Snap. This means switching on and off, a permanently set colour, white, colour gradient and colour recognition from photos or via the camera. Here you can also set general timers, sleep timers and various scenarios using the advanced settings. And, and now comes the most important point of all, the music mode works! To do this, the app must remain open, recording all sounds from the environment and displaying them in color. So if you always wanted to know what the color of your voice is like, you can now watch it live. Music is also represented rhythmically and brightly. Anyone listening to hardcore Gabber music should possibly beware of epileptic seizures.

All in all, the Xiaomi Yeelight Smart LED light bulb is a nice light source with many functions. But I would have liked the music fashion better with the LED band. With only one lamp it looks a bit lame. In terms of price, one can again consider whether the investment is worthwhile. It’s definitely fun.