0 Kommentare March 16, 2018 by Maike
Hey, guys! Just a heads up: The linked offer is already a bit older and the price of the gadget might have changed or it might not be available anymore.

Xiaomi continues to work on the complete coverage of its own home with Xiaomi products. In the Yeelight series we introduce you to various smart light sources, all of which can be easily controlled via smartphone app. First the Xiaomi Yeelight Smart LED strip. 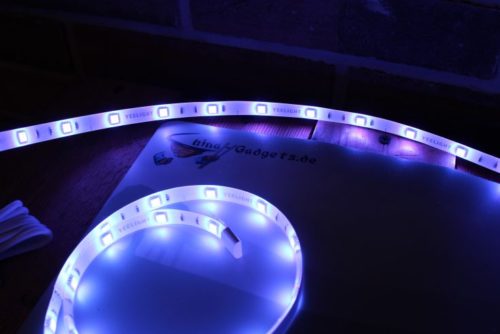 Scope of Delivery & Processing of the Smart LED strip

The Xiaomi Yeelight Smart LED strip comes in a small white cardboard box and is neatly packed. On top of it is a manual written in Chinese only. Since I don’t know the language (unfortunately) I had to try out the way the band works. Underneath the box is the rolled up Yeelight Smart LED strip, under a further cover the wiring with plug and switch. The processing of the strip looks very high quality, as well as the individual parts, which are in typical Xiaomi quality simply in white. Less is clearly more here. If you unroll the LED strip, you can sense a slight plastic smell, which I would not describe as unpleasant. Ideally, the strip has a self-adhesive backing for easy attachment. An extra adapter is not included in the box, so it is better to order a CN Charger adapter as well.

As the manual is only available in Chinese, as already mentioned, I connected the LED strip to the socket first and to see what happens. There wasn’t much at first. After I pressed the on/off switch, an orange LED began to flash on the side of the switch and the strip lit up in bright white. Pressing the button again would turn it off. In a new attempt, pressing the button for a longer period of time while the tape was switched on, the colour changed, but that’s it. To cut a long story short: without an app nothing happens!

As I had already learned from the installation of the Xiaomi WLAN repeater, I set my mobile phone to English, installed the MiHome app and connected the device via WLAN. The LED on the switch lights up blue. And finally I can switch the LED strip on and off by app. But where are the promised RGB colours? Short googling brings the revelation: there is an extra Yeelight app! So downloaded the app, connected the LED strip via it (connected to Xiaomi account) and actually found many different features of the Yeelight Smart LED strip. (I don’t know if this was really necessary. But I was on the safe side.)

Features via the App

The Yeelight app can now be used to adjust the Smart LED strip. There are different buttons: Power, Hue, White, Flow, Favorite and Snap. The power button is, obviously, to switch the strip on and off and this works really well with the smallest delay. Using the Hue button, you can select individual colours and their brightness via a color circle, which then glow permanently. The white button lights up the LED strip white, but you can choose between warm white and cold white. In flow mode, the strip changes slowly between preset colors, but you can also choose four basic colors from a color circle or an image file. To do this, drag a “pointer” over the image file and the app recognizes the displayed color. With the Favorite-Button you can revive your saved colour variations. Last but not least, there is the Snap button, which you can use to open your camera and display a color from your surroundings via the Smart LED strip. The LED strip also stores your last setting and lights up exactly the same after power-on.

Furthermore, you can set different scenarios that apply the current settings and are executed at certain times. For example, what should happen when you arrive at home or leave the house. Timers can also be set to which the tape switches itself on or off. So there are enough functions and settings for every situation.

All in all, the Xiaomi Yeelight Smart LED strip gives a very high-quality and beautiful impression. The functions are all very practical and especially the smartphone handling is great. The integrated widget of the app and the possibility to swipe from the lock screen to the right and go directly to the app makes it even easier.