3 Kommentare October 28, 2018 by Maike
Hey, guys! Just a heads up: The linked offer is already a bit older and the price of the gadget might have changed or it might not be available anymore.

Already for the 153rd time (!) the Chinese technology giant Xiaomi has funded a product on the market via crowdfunding. With the XPRINT Pocket AR Photo Printer there is finally a mobile printer, which is able to do a lot more than just to print.

With a size of 5 x 3 x 1 inches and a weight of 8oz the XPRINT is a very compact photo printer, which reminds us of the past and Polaroid pictures. One can print pictures directly from the smartphone, but only in a size of 2 x 3.4 inches with 291 x 294 pixels. The connection is established via bluetooth or NFC. All Android smartphones with an operating system of Android 5.0 and all Apple smartphones with iOS 9.0 or higher are supported.

As already stated in the name, one of the highlights of the mini printer is the “AR”. With the related app (yet unknown) one can take pictures which are then related to a small video of the pictured motive. While holding a printed picture in front of the camera, the video will be played simultaneously, creating an overlay and the effect of a video being played on the printed picture. Apparently, this process is only supposed to take 0,28 seconds and will be recorded with 120fps. A nice gimmick, with which memories can be preserved with a little video. 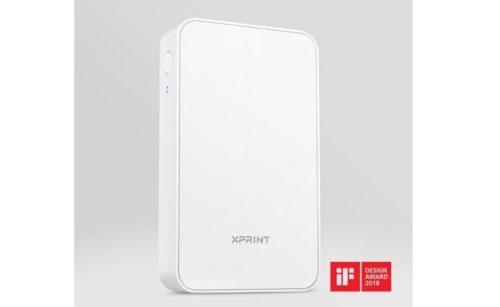 The XPRINT Pocket AR Photo Printer is supposed to cost around $60, the related paper apparently around $6 per 20 pieces. The price right now is far more expensive but I think it will drop as time goes by. Thereby the small printer is a little more expensive than for example the Memobird G2 and it’s predecessor but has a lot more to give, such as the video feature.

Not every aspect of the Xiaomi Printer is necessary, mainly the printing of the (very small) pictures and the connection with the short videos via the app is exciting.

Do you have any ideas what to do with such a photo printer?