1 Kommentare October 31, 2021by Jens
Hey, guys! Just a heads up: The linked offer is already a bit older and the price of the gadget might have changed or it might not be available anymore.

The YABER Pro V7 looks like your average Amazon projector, but it has automatic keystone correction, 9,000 lumens of brightness, and a carrying case. We have tested the projector and tell you what you can expect from it. 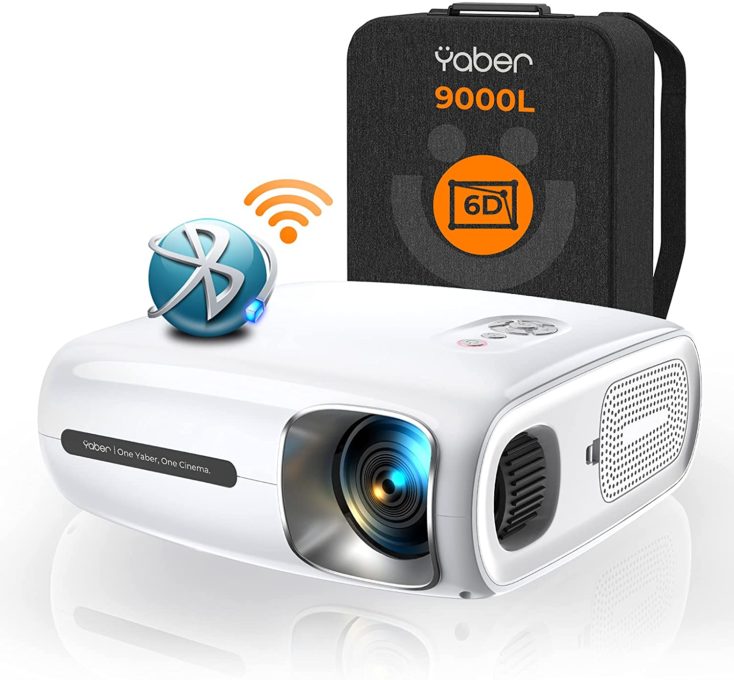 The box is boring and not worth mentioning. However, I was surprised when unpacking, because what I did not know is that the YABER 9000L comes with a transport backpack. The projector and all accessories are also packed directly in it. Plus points right at the beginning, because you can actually stow everything back in it comfortably and transport the projector so. 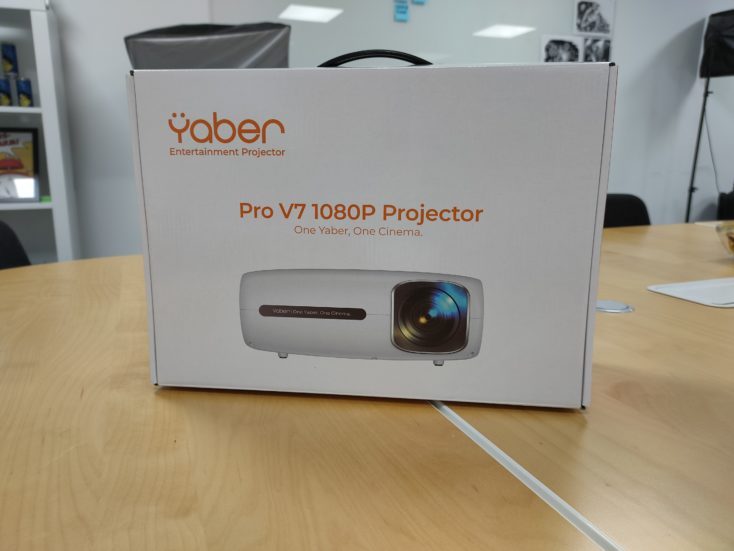 The backpack is tailored to the dimensions of the projector. There is a large compartment where the projector is placed and a smaller one above it for the cables and remote control. If you don’t plan on ever taking the projector anywhere, just use the backpack elsewhere. 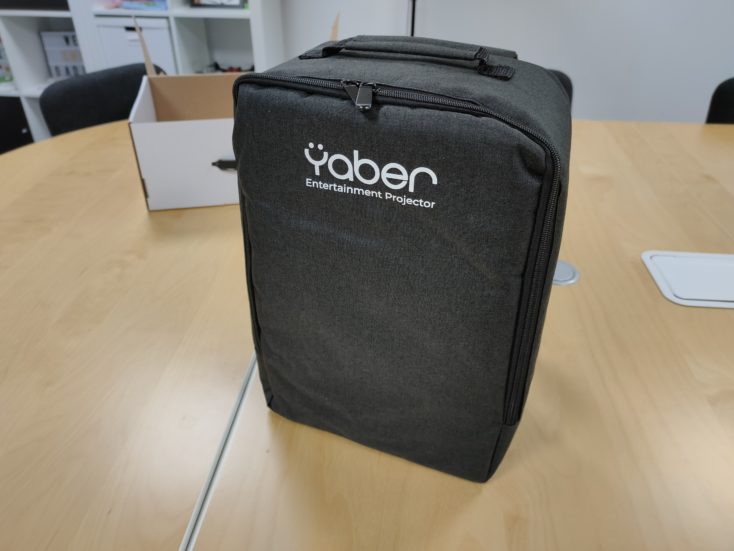 Apart from the bag, there is a charging cable and an HDMI cable, as well as the infrared remote control. An instruction manual explains the projector in various languages. 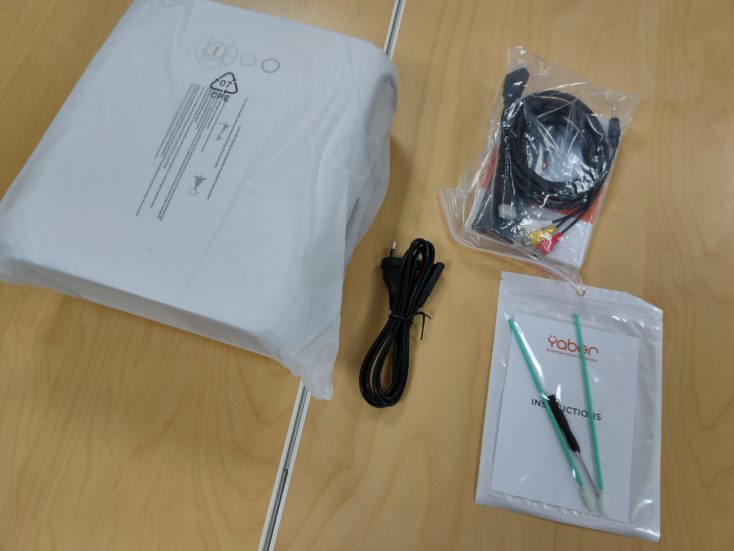 The build quality is appropriate for the price. Plastic, but neatly finished and overall quite respectable. On one side is the fan with a removable dust filter.

The buttons on the top allow navigation in the menu. However, I never used them after trying them out for the first time, since you have the remote control for that. Furthermore, not all buttons of the remote control are available here. It is good that they are there, but they are not needed. 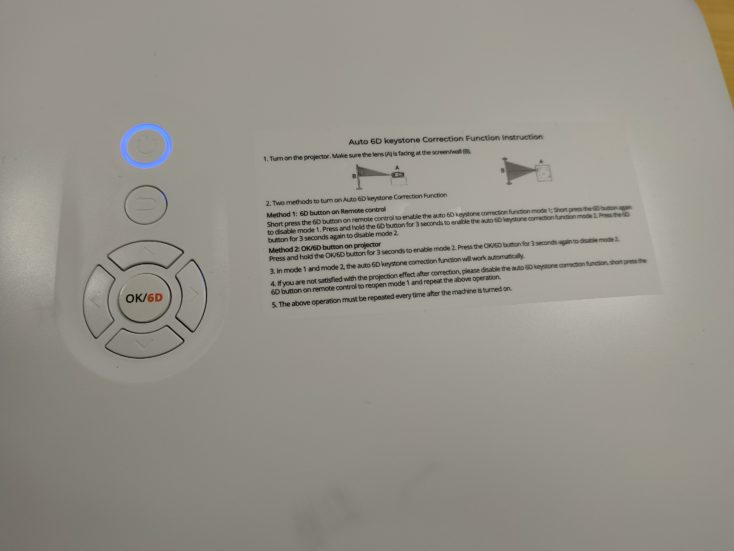 The lens cover is quite tight at first and cannot be removed easily. If you want to put it back on, it does not always work directly. This is not awful, but it is noticeable.

There are two HDMI ports and two USB ports on the back, as well as an AUX port and the port for the power cord. 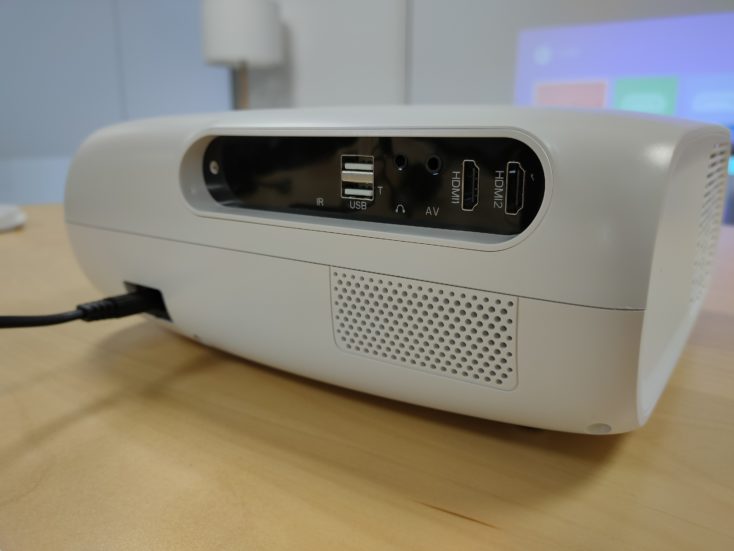 This is an LED projector with the known advantages over conventional lamps. These are mainly lower energy consumption, lower heat generation and a longer service life. Manufacturers usually quote 20,000-50,000 hours. Yaber goes a step further and states an upper limit of 1,000,000 hours on the Amazon product page. I haven’t had the time to check the truth of this, but I’ll let you know as soon as the 114 years are over. I’ll just assume a mistake here; even the advertised “SmartEco” technology won’t make this absurdly high value possible. But LEDs generally last quite a long time, yes.

The operation is mostly done by the remote control. You can also use the buttons on the projector itself, but that’s less common in practice. A small disadvantage: The remote control works with infrared, so it has to be aligned relatively precisely to the projector. Even then, key presses are occasionally not recognized.

A helpful feature, which the manufacturer explicitly advertises, is the automatic keystone correction. This can be activated in two ways. A short press on the 6D key of the remote control activates the auto-correction, but then only shows you a “test field” with the four screen corners. Here I had my problems with the setting, and after some back and forth, the image was very distorted even with the projector aligned frontally to the screen.

If you hold the button down a bit longer instead, a continuous auto-correction is activated even with an active image. This worked well for me and I would recommend this as the default setting. If you turn the projector slightly, the image is automatically adjusted to the screen. In any case, this works sufficiently well and, in my experience, is anything but standard in this price range.

Perhaps one of the most important features right off the bat: the beamer is definitely bright enough. “Enough” is relative in this case, of course; what I mean by that is that it’s usable even during the day in rooms that aren’t darkened. Not when the sun is beating down through the window, but in average daylight.

The brightness is initially stated as 9,000 lumens, but the description also mentions 8,500 lumens. The contrast is sometimes stated as 12,000:1, sometimes as 10,000:1. You cannot completely rely on the values, but they give an approximate impression. 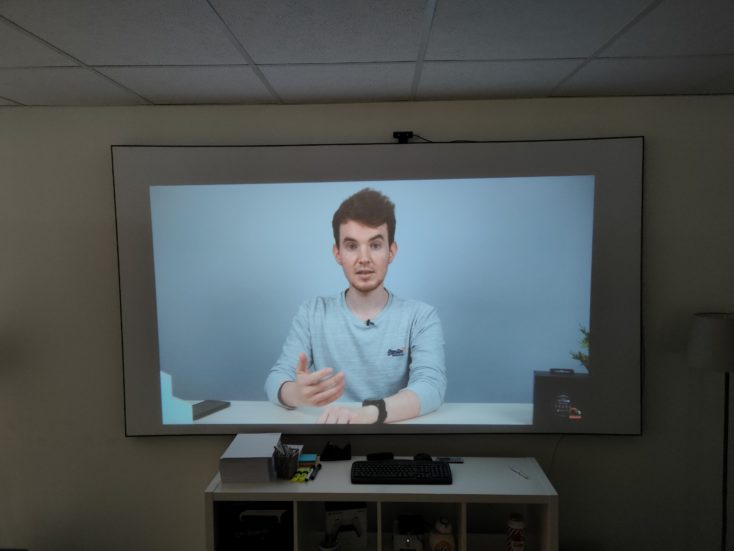 The resolution of 1080p is the least that a projector should offer in my opinion. 4K content can at least be played back. Unfortunately, I find it a bit difficult to focus the image 100% with the dial. Perhaps I’m just used to the autofocus of other projectors by now.

You can make the usual adjustments to color, contrast, and the image quality. A few preset profiles can be selected, but you can also change all sliders individually in a user-defined option. 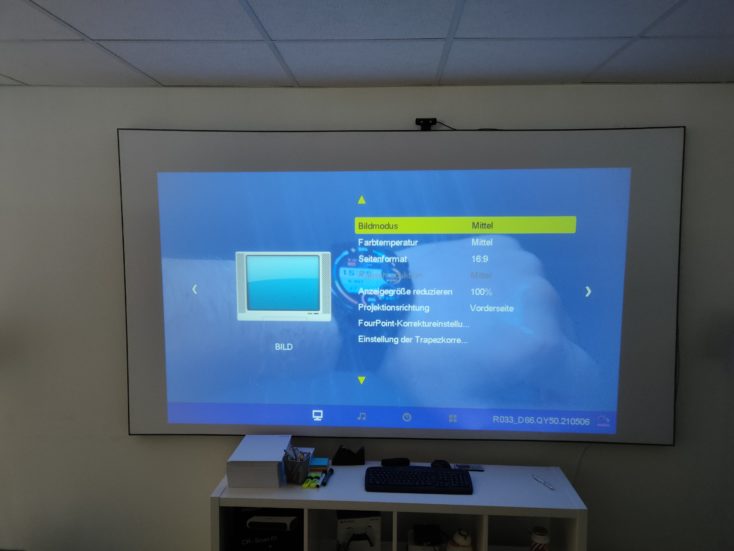 Yes, the fan, often a sticking point with inexpensive beamers. Here, too, we have to note that the fan is comparatively loud. Perhaps I am spoiled by the ultra-quiet fans of the Xiaomi Mi Smart Projector 2 Pro, which is currently in use in our office. And during soccer or other sporting events, the noise of the fan is also drowned out when the volume of the speakers is turned up. Unfortunately, it can’t be ignored during movies or series. This doesn’t bother everyone equally, but it might be a dealbreaker for some.

I also want to say a few words about the speakers, which I like surprisingly well. They don’t replace a sound system, but are above average for a beamer in this price range. As expected, the low tones in particular have little volume and don’t have the desired effect in action sequences.

I admit, I was skeptical at the beginning of the test, since I basically don’t think much of the numerous Amazon beamers in the $100-200 range. In addition, some of the reviews already reported the very loud fan. However, after I was able to try out the Yaber Pro V7, I am positively surprised. Yes, the fan is comparatively loud and the biggest criticism I have.