3 Kommentare December 28, 2018by Kristian
Hey, guys! Just a heads up: The linked offer is already a bit older and the price of the gadget might have changed or it might not be available anymore.

Chinese manufacturers make it their business to really make every part of your home smart. In addition to vacuum robots, lamps and air purifiers, this also includes locks, and not just since yesterday. A new variant is the Yeelock drawer lock, which will make keys obsolete in the future. Since there was some skepticism, we ordered it. Our Yeelock review! 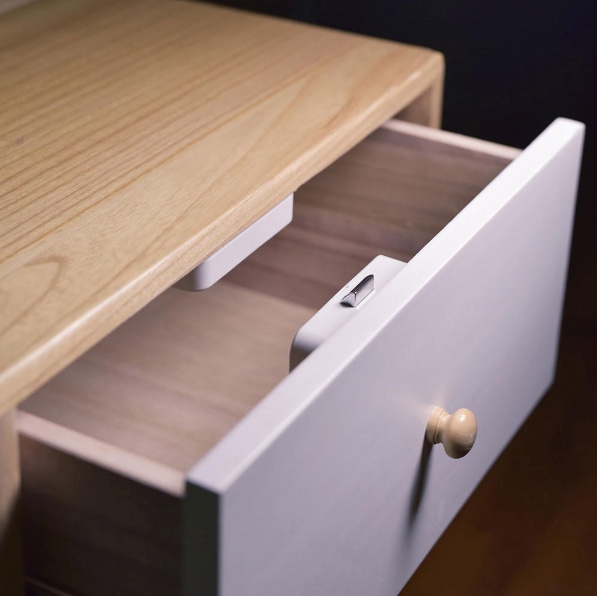 The smart lock of the Chinese manufacturer basically consists of two parts. The larger part contains the trap and the Yeelock logo. With dimensions of 90 mm in length and 54 mm in width it is considered the “lock body”. The counterpart, which offers the recess for the latch (slanted bolt, also known as “snapper”), is slightly smaller. This also measures 90 mm in length, but only 40 mm in width. Both parts are 18 mm thick. 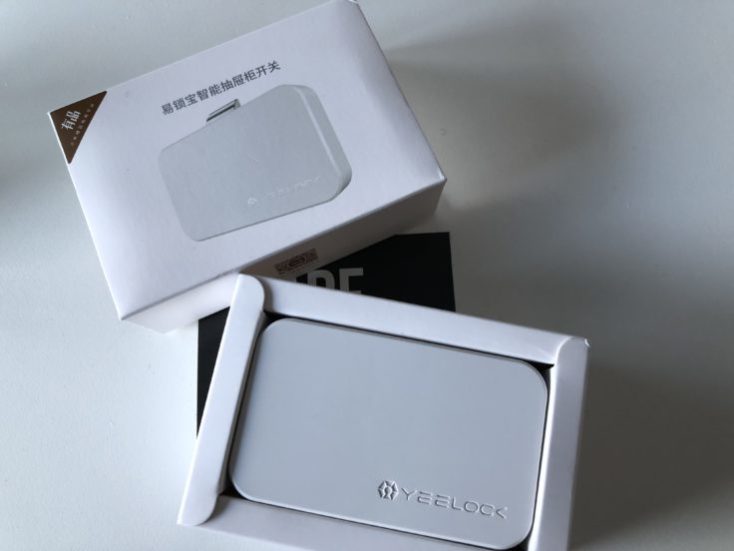 Even though it is not officially by Xiaomi, Xiaomi’s handwriting is unmistakable in the Yeelock drawer lock as well. The manufacturer’s white and minimalist design has become a trademark. Since simplicity is a top priority here, no craftsmanship is necessary. Thanks to the 3M adhesive strips, the lock is easy to glue on.

But of course this would also be a great uncertainty for the lock, an adhesive lock can be destroyed by anyone with minimal effort. The lock comes with a metal washer and ~2cm long screws, so you can screw on both bodies. If you have even thicker wooden walls, you can of course use your own, even longer screws.

The manual is completely in Chinese, but you can’t really do much wrong.

The two required AAA batteries are already included in the pack and by pulling out the small plastic flag the lock is already active.

All in all, I was able to install it within 5 minutes. Of course, it requires a somewhat standard drawer – ideally made of a material in which you can also screw in a screw.

Smartphone as a key

The smart thing about this lock is the Bluetooth connection with the smartphone. You can use it to unlock the lock if necessary. We already know this in this form from the Bluetooth padlock, which we have already tested. Bluetooth 4.0 is used for this and the own Yeelock app (iOS / Android) has to be downloaded.

Here is a (for me) bold limitation. Unfortunately the lock can’t (at least not yet) be used with Mi Home or the Yeelight app. I.e. you need another app. The actual lock can be downloaded in the app via the QR code in the user manual. This means: Don’t throw away the manual – even if it is in Chinese!

The app is also available in English, unlike the app screenshots in the stores. However, you have to register with your own phone number before you can use the app. The use of a spam mail address is not possible. After adding (see below) you have some options, e.g. the use with several persons, the name assignment (useful with several locks), etc..

Certainly very useful: The setting of what should happen when the batteries are almost empty. Here the lock can either remain locked (and the axe must be used?! :D) or the lock unlocks automatically. The manufacturer promises, however, that the battery life is very long and the closing itself does not need much power. The remaining battery level of the Yeelock can be read out via the app, so that you can replace the batteries in time.

Once the smartphone and lock are digitally connected, the lock can be opened in one to two seconds. This works in my test over a maximum distance of 10 meters.

The installation of the typical drawers is super simple and in case of doubt even easier than a conventional lock (really oldschool with key and so on) to retrofit. Of course the Yeelock doesn’t help against the professional burglars of the world, but it prevents the unwanted look of the curious visitor. I actually shook and pulled my drawer so much that I was afraid for the shelf ;-).

For me the big disadvantage is: The (still?) missing integration in e.g. Mi Home or whole Home Assistant systems, like HASS.io. So I need (again) another app, which also wants to have my phone number (for what?!).