Zhiyun Crane M2: A gimbal for actioncams, smartphones and cameras for $161

1 Kommentare August 26, 2020 by Maike
Hey, guys! Just a heads up: The linked offer is already a bit older and the price of the gadget might have changed or it might not be available anymore.

Gimbal is Indonesian and means “dreadlocks” in English. But this has little to do with the meaning we have for gimbals: Motorized gimbals – or more practical: stabilizers for cameras – have been available to a wide market at least since DJI’s release of the Ronin S. What was priceless years ago is now raising many recordings with various cameras to a new level. The Zhiyun Crane M2 is no exception: Besides lighter DSLM cameras and actioncams, smartphones can also be clamped into the gimbal. 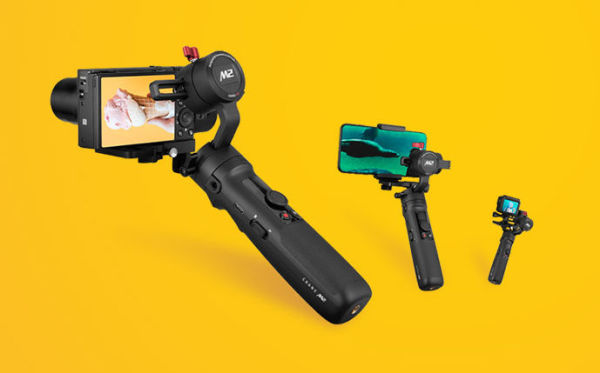 Visually, the Crane M2 does not differ much from virtually all other gimbals. The ergonomically formed handle with leather texture is equipped with a small OLED display, on which the gimbal mode or Bluetooth and WLAN status can be read. The USB C port, on/off switch, rec and mode change button and a joystick are also easily accessible with one hand on the handle, which holds an 1100 mAh battery. The gimbal suspension is on top. As with most “simple” gimbals, a 3-axis stabilization is used. 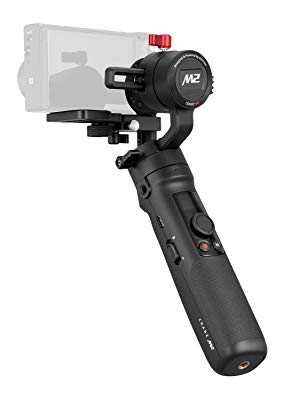 In addition to small digital cameras, smartphones can also be mounted on the gimbal. For this purpose, a special holder is included, which can be clamped onto the gimbal instead of the camera. 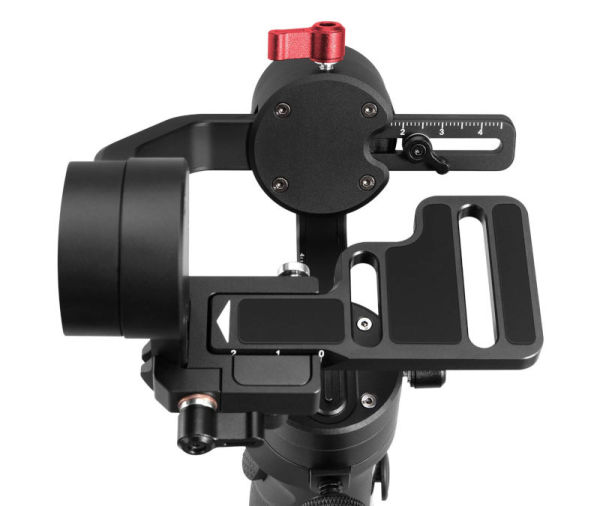 The quick-release fastener allows faster assembly and disassembly and can be pushed into the gimbal without any problems.

Thanks to a thread at the bottom of the handle it is also possible to mount the gimbal on a tripod or on the included tripod. 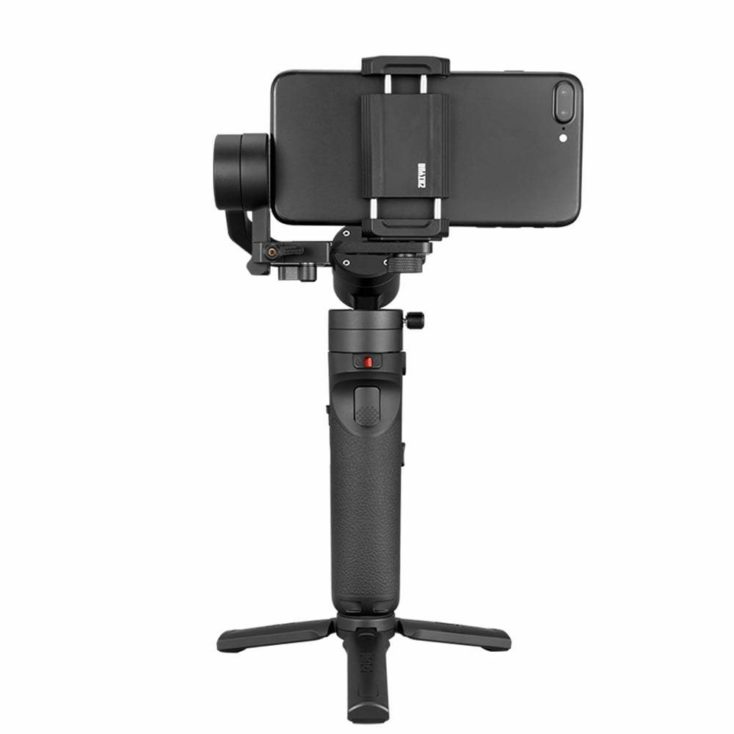 What modes and settings are available?

The Zhiyun Crane M2 adds a few extras to the usual settings for filming. 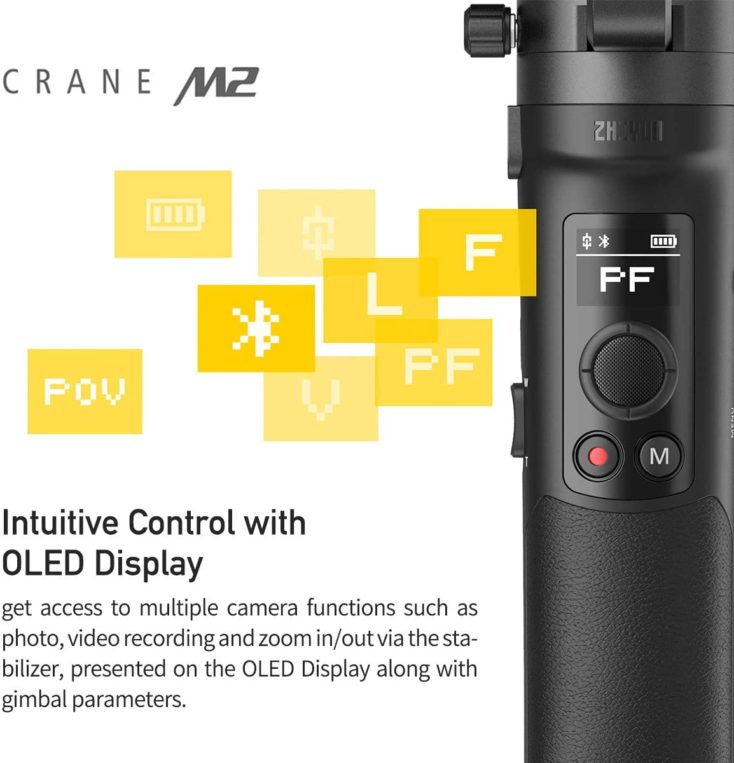 In the so-called “Pan Following” or simply pan mode, the camera remains horizontally aligned, but slowly follows the rotation around the longitudinal axis.

In pan and tilt mode (just “Following”) the camera will follow, no matter in which direction you move the gimbal.

The lock mode is also always on board. It locks all axes and the camera will ideally always film in the same direction. So you should have a steady hand, because the gimbal does not follow your movements.

As a cool gimmick there are also 3 more modes that you don’t have included with every gimbal. The “Go-Mode” is ideal for shooting in motion and for sports. It allows very fast panning or tilting.

We think the Vortex mode is really cool, which we have already experienced as inception mode with other gimbals. It allows stylish 360° barrel shots in all directions.

And as if all this wasn’t enough, the Zhiyun Crane M2 also comes with a POV mode. This allows a synchronous movement of all 3 axes. What you can do with it Zhiyun shows here:

The accompanying ZY Play App makes it easier for you to use the one-handed gimbal. There are also time-lapse and panorama shots available.

Which cameras can I use with it?

Generally speaking, anything that can take pictures and weighs between 120 and 720 grams should be compatible. Most suitable are of course almost all smartphones and action cams, but also normal DSLM cameras should be able to benefit from the Gimbal. But most SLR cameras are too heavy for the Zhiyun Crane M2. 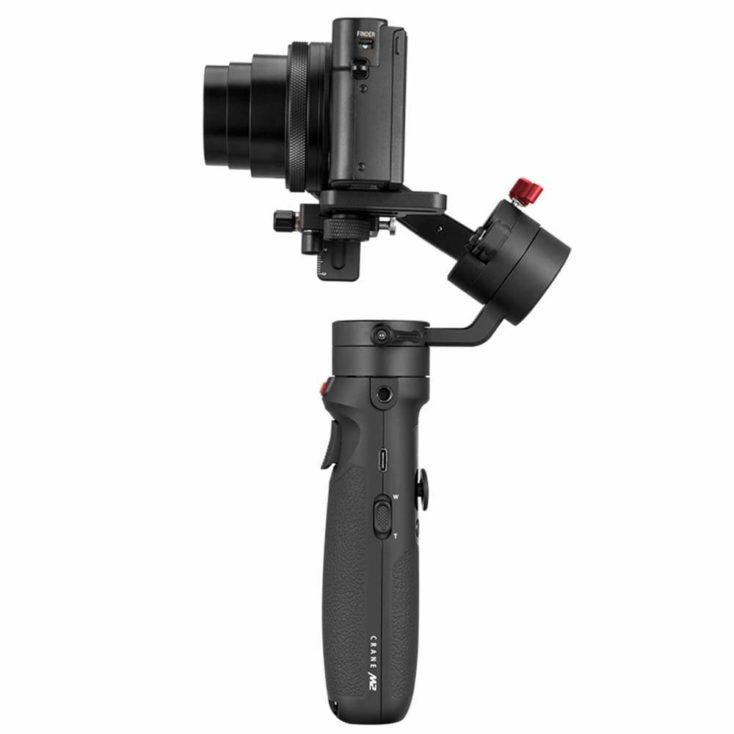 Our assessment: Should you buy the Zhiyun Crane M2?

With the Zhiyun Crane M2, the world market leader in gimbals has a complete package for beginners and also advanced players in its range. Not many devices cover smartphones, action cams and digital cameras. In many tests the gimbal scores top marks and at first sight no wishes remain open. The weight is okay, the display is a useful addition and the range of functions is large. With a good offer for less than 200€ you will surely not make a bad deal. Which experiences have you made with Gimbals??