4 Kommentare August 15, 2019by Jens
Hey, guys! Just a heads up: The linked offer is already a bit older and the price of the gadget might have changed or it might not be available anymore.

In search of a good 4K video drone we also stumbled across the ZLRC Beast. The data sheet sounds promising for significantly less than $200, but is the drone also convincing in practice? We have flown a test flight. 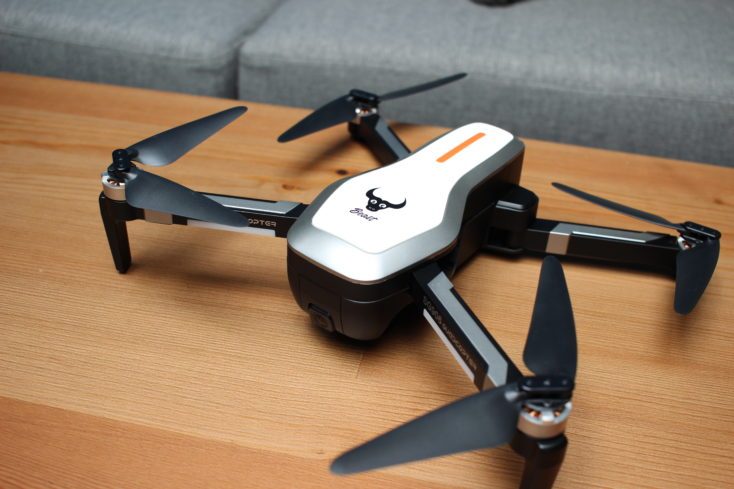 The name fits on the outside, because with its wide, solid front the Beast actually reminds a bit of a bull, which is also shown in the printed logo. Apart from that, it’s the same concept as almost all current drones. The arms are foldable, so that the drone fits well into the enclosed bag. In contrast to the Fimi X8 SE, the rotors are firmly screwed and not easily removable. 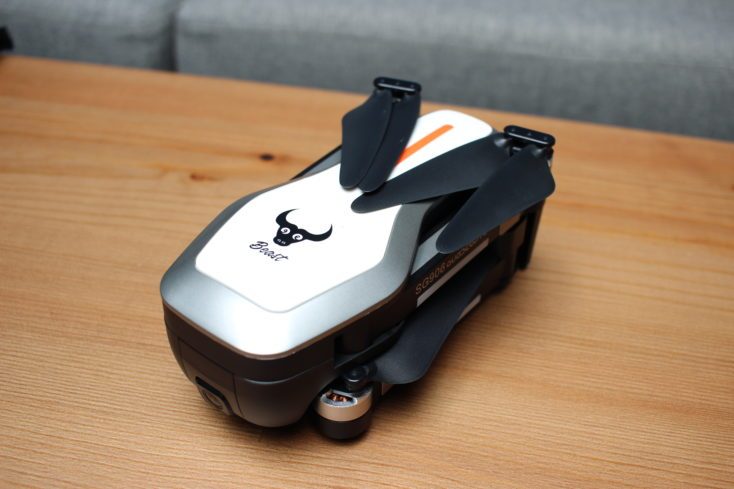 I like the “packaging” very much. The drone comes directly in a fabric bag with foam padding, in which drone, remote control and accessories can be stowed. Thanks to the handle and carrying strap, the bag is easy to transport – very good. 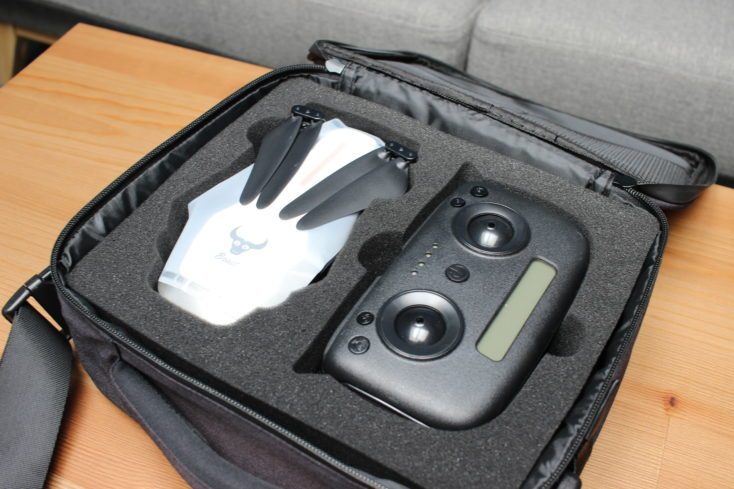 The drone’s cover is mostly made of plastic, which feels quite stable on the fuselage and rather cheap on the arms. There is no gimbal, but the camera can be adjusted manually by about 90°. The camera can also be removed. Overall, the workmanship is rather mediocre, but nothing wobbles and there are no large gaps. 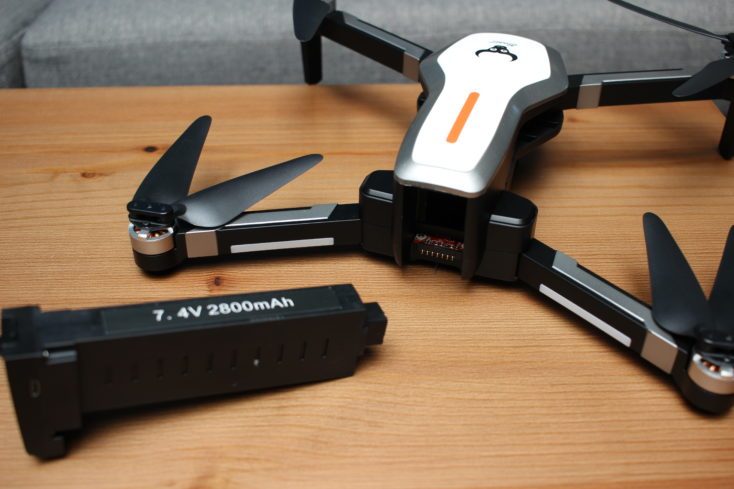 The remote control is made of plastic and already feels much cheaper than the drone. Also the sticks, which look like metal, are plastic. The fold-out holder doesn’t look great either, but it holds the smartphone securely. In the price range, everything is not that bad. 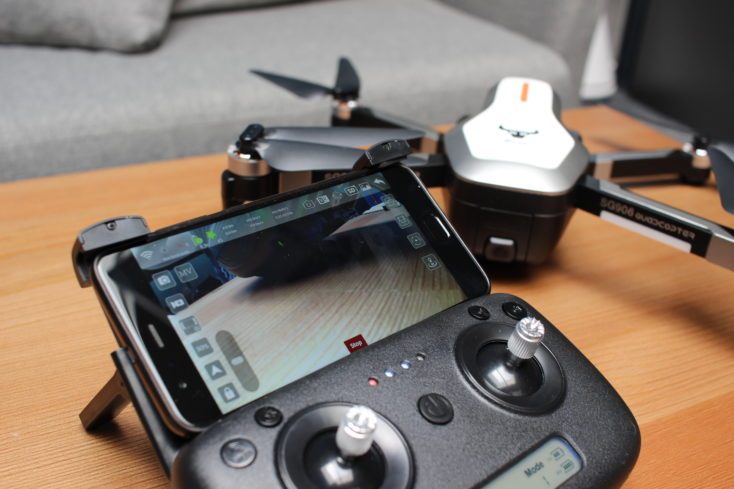 There is nothing wrong with the control system. The sticks are easy to operate and the keys all react reliably. Additional information is provided by the LEDs in the middle, which indicate the battery status of the remote control, and the small display at the bottom, which shows the height and distance of the drone as well as the GPS signal. If you fly with a smartphone, you don’t need the display, as all relevant information (and more) is also shown on the mobile phone display. 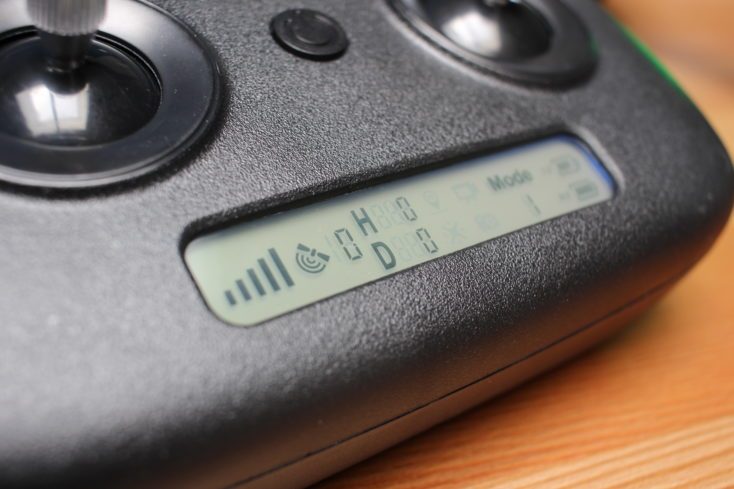 As I said, the drone control works as well as you’re used to. If you press both sticks inwards like a “V” when you are not in use, the engines start. The drone holds its altitude in the air quite reliably, even if there are slight fluctuations. Unfortunately, it is a bit susceptible to wind and only brakes decelerated, which makes very precise manoeuvres complicated.

The acceleration and maximum speed are rather low, but the drone rotates very fast around its own axis. This makes very sharp turns possible. There are some smart modes like a waypoint and tracking function, but firstly they don’t work perfectly and secondly they don’t do much without a camera. At least these features are good for trying out, which is still quite nice if you have never tried it with another drone before. The RTH function (Return to home) works well and brings the beast back to the starting point with an accuracy of about one to two meters. 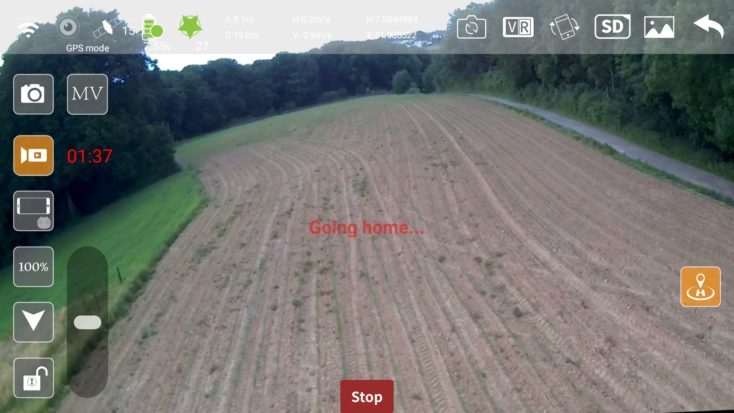 Overall, the flying experience is rather average. If the ZLRC Beast is your first drone, then it’s probably fun to try something new with it. However, it moves too inaccurately in confined spaces and lacks other special features. 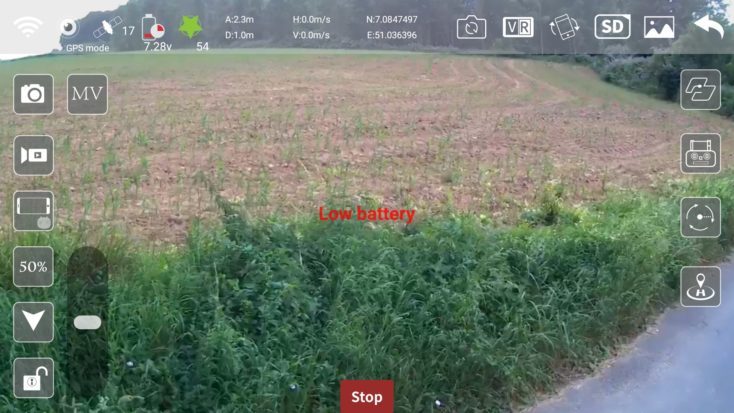 A positive note is the battery life of over 20 minutes. The flight doesn’t seem too short, instead the “Beast” stays in the air for a long time. Somewhat stupid: The LEDs of the battery don’t seem to reflect the status correctly, but all four remain active until shortly before the end. Also the display in the app is not the most accurate, which is why the end of the flight is always a bit sudden.

The app is called HFun Plus. You can find it in the Google Playstore as well as in Apple’s Appstore. The app is quickly set up and only requires the usual access rights to the camera and memory. The menu languages are Chinese and English; however, the tutorials and explanations are limited to Chinese and therefore mostly useless for us. 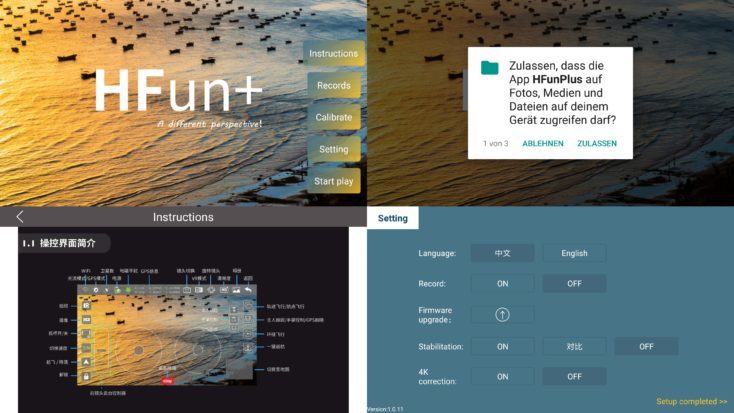 After all, the app is clearly arranged, and anyone who has ever seen the app of another drone will also find their way around here. In the actual interface we find the most important flight information like altitude, distance and speed; left and right different settings for the camera and the different flight modes.

What is really exciting is that the drone should be equipped with a 4K camera. This is unusual in this price class as well as for a drone without a camera gimbal. It would be even nicer if this weren’t just a marketing trick and the video resolution was really 4K – but it’s not. To avoid misunderstandings: There is also a 1080p version of the drone, you can’t expect a higher resolution. But this model is explicitly advertised with “4K” in all shops.

The explanation is quickly found: The photo resolution is called “4K”. And yes, the photo resolution of 12 MP corresponds to approximately 4K, but you would expect videos for the name. And while those at Cafago and Banggood are still described with 2K (2048 x 1080p), the actual resolution of my pictures is Full HD (1920 x 1080p).

But it’s not that bad, because the ZLRC Beast is not suitable for filming anyway – if you mean by “movies” to also get presentable shots. Without a gimbal, the shots blur a lot; the vibration of the drone also results in horizontal stripes in the picture. Apart from that, the drone is much too restless in the air and the camera also tilts too much when accelerating and braking.

The sound is recorded here on the mobile phone and is not as choppy as in the example video; this was only created during the Youtube upload.

The photos are “okay”, depending on your requirements. There’s a strong fisheye effect, and the sensor doesn’t really cope well with differences in brightness. However, the 12MP resolution ensures sharp pictures at least on the smartphone. Only at high magnification do the inaccurate and blurred individual pixels stand out.

Why do you advertise the drone as a 4K camera drone? This raises completely wrong expectations and inevitably leads to a deduction of points. Neither are videos recorded in 4K, nor are the recordings somehow usable to make a nice video out of them. The photos are okay for the price of the drone, but they also fall into the category “see my house from above” rather than “artistic landscape photography from the air”.

The drone remains as a toy to fly. Here I can’t say that the ZLRC Beast is difficult to control, but not really good either. Only the flight duration stands out positively for me. Too bad, because the first impression was really good with the enclosed bag.

For filming I like to refer to the FIMI A3, which already delivers much better shots for a 50% higher price. In my opinion you should invest $400 and think about a DJI Spark or FIMI X8 SE.