It’s time! Is the age of notches, punch-holes and pop-up cameras (finally) over? On September 1st ZTE will release the first smartphone with a front camera under the display. Does the ZTE Axon 20 5G herald a new smartphone age? What we know so far

ZTE has been a pioneer in this field and is the first manufacturer worldwide to introduce this new technology, although Xiaomi and Oppo are already working on it. Ni Fei, ZTE president, has already published teasers about the USC (Under-Screen-Camera) in the social media and discredited the previous solutions in the form of punch-hole and pop-ups.

The front camera under the display is made possible by transparent AMOLED displays. The manufacturer of those in the Axon 20 5G is yet unknown. But there is already a first official photo of the new top smartphone, which shows the Axon 20’s rimless design. Similar to a Poco F2 Pro, the display is completely uninterrupted, it is only surrounded by a very thin screen border. In contrast to the Poco, however, the pop-up camera is obviously missing here, the front camera sits at the top under the display and is at least not visible in the photo. 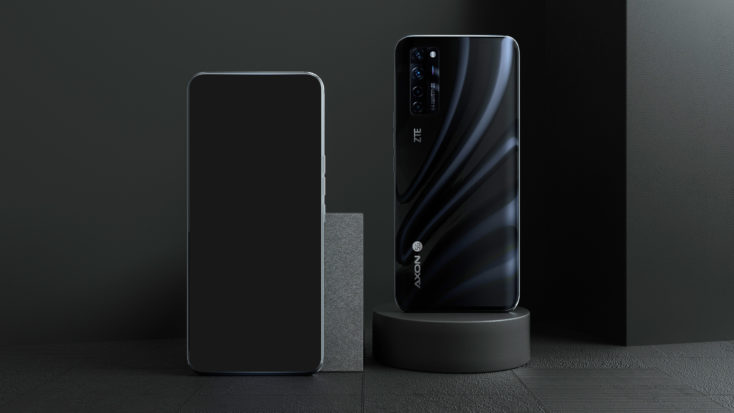 The backside attracts attention with a kind of “zebra design”, somewhat arbitrarily curved horizontal stripes are the highlight of the otherwise completely black backcover. But those will probably just be the light reflections. In the upper left corner there is the camera module that directly accommodates four cameras. This is a 64 megapixel main camera with ƒ/1.8 aperture. The focal length range is given as 16 – 25 mm, which indicates that we are dealing with an ultra wide angle camera, but we are not getting an optical zoom.

Other previously known specifications can be found in the TENAA certification. The AMOLED display of the ZTE Axon 20 5G is said to be very large at 6.92″ diagonal, but the resolution still seems to be “only” 2400 x 1080 pixels. Given the size, a QHD+ resolution would have been desirable. The processor should “only” have a clock frequency of 2.4 GHz, which would already rule out a Snapdragon 865(+), whereas the currently very popular Snapdragon 765G would have the appropriate clock frequency. Add to this 12 GB RAM and 256 GB memory and a battery with a capacity of 4,120 mAh.

Probably almost everyone who has been studying the smartphone market for some time and enjoys using smartphones has been waiting for this day. And it is indeed somewhat surprising that ZTE in particular is playing the role of first mover. We would actually have expected Vivo, Oppo or Xiaomi to do this pioneering work. But for such an anticipated model, the specs known so far still confuse us a bit. Doesn’t the ZTE Axon 20 5G get a flagship processor from Qualcomm and a zoom camera? How much does ZTE charge for it then? We’re also curious about the photo quality of the front camera. The manufacturers’ previous problem was probably to guarantee a good image quality. We’ll have to wait until September 1st for that.

What do you think about the under display camera? Have you been waiting for it or don’t care particularly about it?